Importance of Social Intelligence in our lives

I was reading this book- Social Intelligence by Daniel Goleman today. 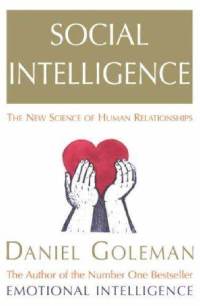 The author has written a groundbreaking synthesis of the latest findings in biology and brain science, revealing that we are “wired to connect” and the surprisingly deep impact of our relationships on every aspect of our lives. It talks about  how effective leaders understand connections with people, and can make or break any given situation.
In the first chapter of the book, he narrates this wonderfully captivating incident that had occurred in Najaf, Iraq during the U.S. Army's invasion in 2003. Lt. Colonel Chris Hughes' unit was assigned the task of contacting the Chief Cleric to ask for his help in organizing relief supplies for those in need. Seeing the army heading towards the mosque, an angry crowd of hundreds of civilians came together with the mistaken impression that the Americans were going to destroy their holy shrine or arrest their spiritual leader.Hundreds surrounded the soldiers waving their arms, grabbing rocks and shouting angrily.
The Colonel thought fast. He picked up a loudspeaker and told his unit to take a knee.
Next, he ordered them to point their rifles toward the ground.
Then his order was: “Smile.”
At that, the crowd’s mood changed instantly. They put their stones down, smiled and even patted the soldiers' backs. This quick-witted move was the culmination of a split-second reaction and high social intelligence. Hughes quick wit and social instincts won the day. He read the level of hostility of the people with no intermediary to calm the growing mob, he bet on the discipline of his men and their trust in him to ease the tension.
Relationships are about much more than mere feelings. Goleman reveals that our interactions with others actually have the power to shape our brains. People are hardwired to connect socially; we are programmed for kindness, to feel what others feel and to respond to each other. Our relationships literally mold us. Goleman believes we can use our social intelligence to make the world better place. It’s interesting. This is what the scriptures told us, written millenniums ago.
As you enter your world today — how is your social intelligence? Are you aware of what others are silently saying to you with their facial expressions? With their body language? With their silence? How are you leading them?
Source: http://j.mp/oXIzC9
http://j.mp/nrPVKQ
Scripted by Unknown at 7:53 PM