How to keep tabs on the Indian General Elections - 2014

With the Elections just around the corner, several politicians and their respective parties are busy polishing their image, building their portfolios, mending ties with their allies, sling mud at their rivals and preparing their manifestos. At the same time, traditional media and social media platforms are coming up with innovative tools to help the public keep tabs on all the happenings on a national and local level.

Here are some of the tools, trackers and portals you could 'bookmark' or save to stay up-to-date with the General Elections 2014:

Facebook India Election tracker
Recently, Facebook rolled out its India election tracker app for its 80 million odd users in India. Visitors to this dashboard would be able to watch the Candidates 2014 livestreams, take a poll about the issues that matter the most to them in the election as well as compare how much the Facebook community is talking about leading candidates and parties over time.

To view the app, go here 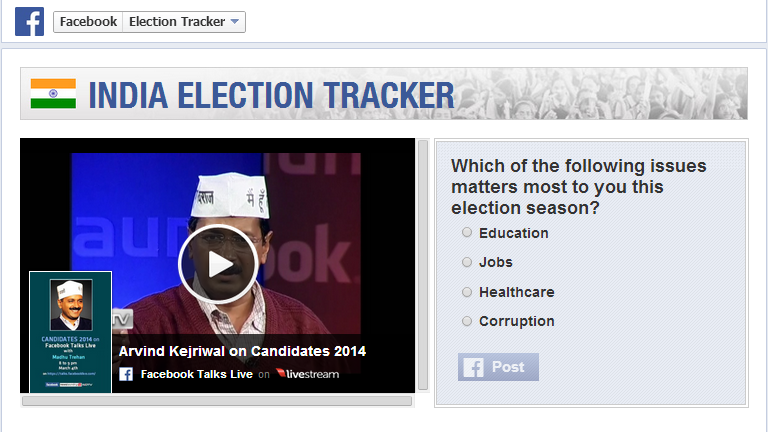 MTS Election Tracker
Whether you are a politician, journalist, or someone who just wants to keep a track of the latest happenings in the world of social media and politics, the Election Tracker is your answer. This tracker from mobile telecom service provide MTS and India's largest Social Media knowledge storehouse Social Samosa provides real-time data analysis, comprehensive tracking, relevant data and graphical representation to help you stay updated on all the social media conversations around the elections.

To view the tracker, go here 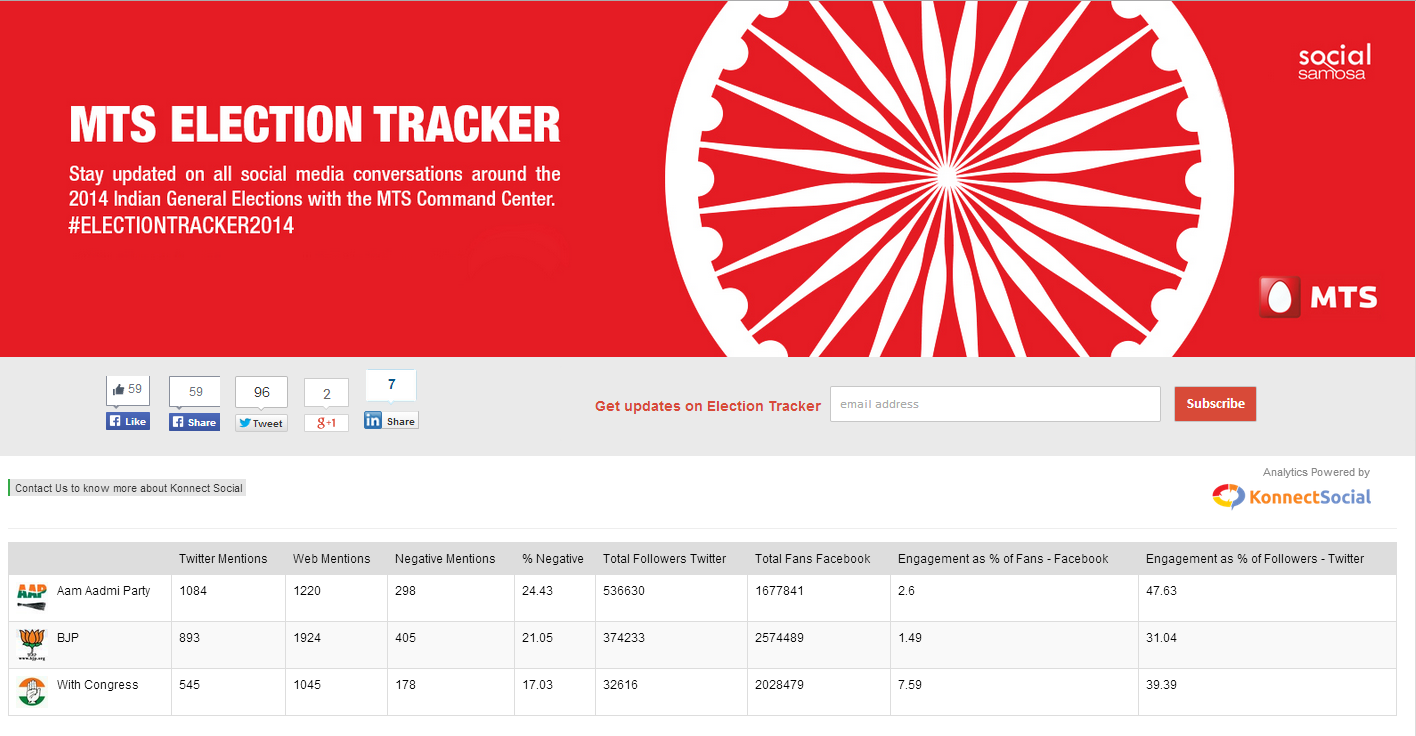 
Towards the fag end of 2013, Google launched an elections portal that aimed at assisting the Indian voters to understand the electoral process, get access to all the news related to elections and politics, get detailed information on specific political parties and serve as a one a one stop destination to help voters get answers to their elections and voting-related queries to make an informed decision.

To view the portal, go here

YouTube Elections Hub
Catch all Hangouts and Election related stories on this dedicated hub for the Indian elections by YouTube. YouTube has partnered with all the top news channels across 5 languages to build this one stop destination for all the top stories, breaking news and campaign trails during the elections.

To view the hub, go here 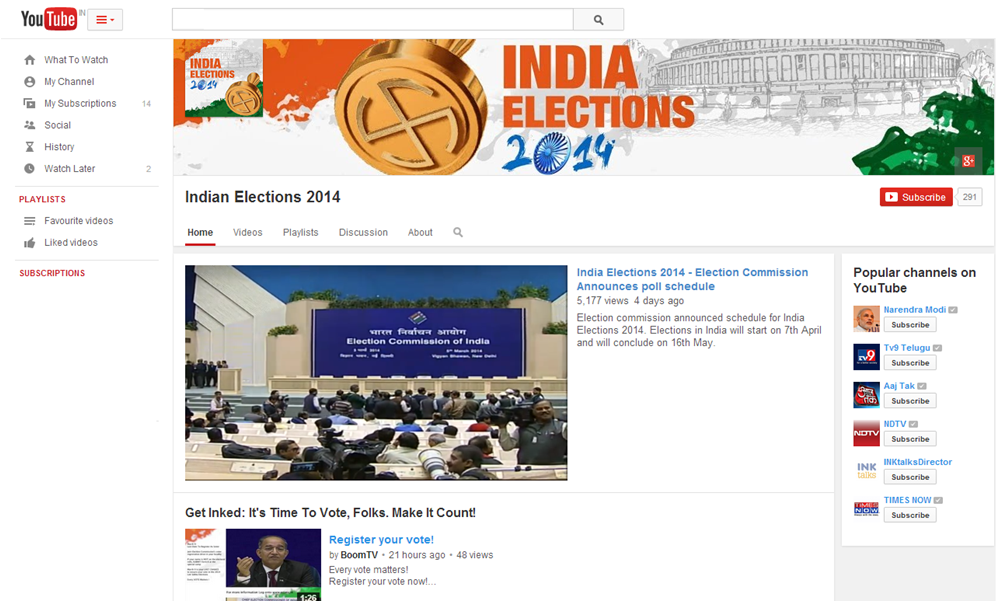 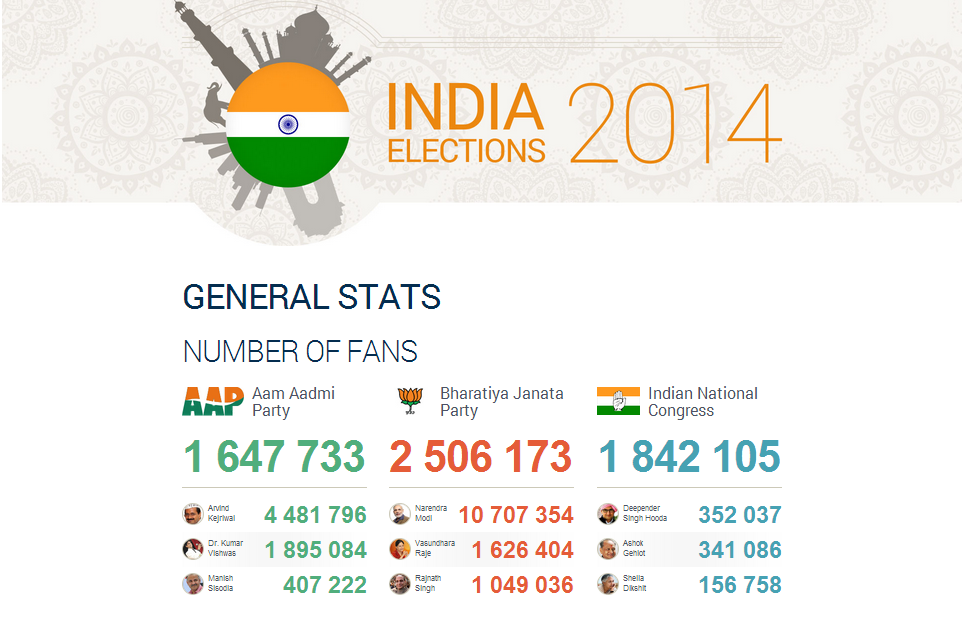 Elections.in
This portal from MapsofIndia.com brings to you everything related to elections as they unfold. It provides up-to-date news, accurate maps, critical analysis, and facts on the various elections in India. Opinion polls allow users to express themselves and get their voice heard. To view the portal, go here

Facebook Lists
Facebook provides its users with an option to organize the important and interesting content through the Lists feature. This feature helps The users can create their own interest lists based on the things they care about, or follow other people's lists. When the user creates or follows a list, they would see the best posts from that list in their main News Feed. Check out the following lists curated by Karuna Nain from Facebook India: